Winners of the SLA Undergraduate awards 2016

Here are our three winning students with Dr Luke Burns who organises the awards for us. From left to right: Dr Luke Burns, Joseph Hussey, Russ Smith and Alana Turner.

All the entries were of a very high standard and judging was tough but the judges agreed unanimously on their choice for the top three so congratulations to our winners.

“Physical accessibility to retail employment in the West Midlands”

The judges said: A very timely piece of research where the policy implications are as significant as the sectoral ones (given the changing nature of retail employment). Highly deserving of recognition. 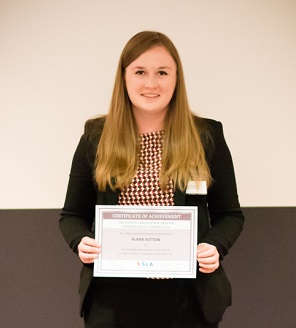 “An Investigation into the Grocery Shopping Habits of University Students: A Case Study of Leeds”

The judges said: Interesting piece of analysis on an under-researched area which reaffirms many aspects of predicted student behaviour but also highlights more unexpected behavioural patterns 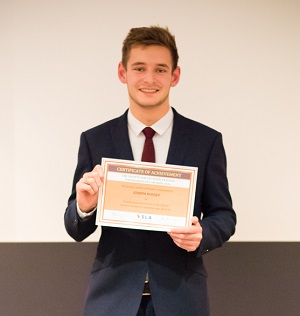 “Assessing the association between Industry of Employment and Divergent Geographies of Wealth in England, 1981- 2011”

Winners of the SLA Undergraduate awards 2015

We are delighted to announce the winners of the first SLA Undergraduate Awards competition run by the Society for Location Analysis.

All the entries were of a very high standard and judging was tough but the judges agreed unanimously on their choice for the top three so congratulations to our winners.

Here they are being presented with their awards: Jonathan Reynolds, SLA Chairman and Lecturer at Oxford University presents awards to Jamie Tasker and Lauren Parker with fellow judge and awards advocate Luke Burns of Leeds University

All the entries were of a very high standard and the decision was tough but the judges agreed unanimously on their choice for the top three so congratulations to our winners.

His undergraduate dissertation was entitled ‘Analysing the Middle Geography of Click and Collect: The Future of Convenience Retailing?’

Brief synopsis: – To some observers in the early 21st century, the Internet was seen as an all-consuming force that would eventually replace traditional brick-and-mortar stores. This theory was not just blind optimism as evidenced by the 1,779 UK store closures since 2012. In order to survive in the digital era, traditional retailers need to catalyse innovation by combining modern technologies with their existing network of physical stores.

Click and collect is an example of retail modernisation that allows the consumer to overcome a large number of drawbacks associated with the physical store and online delivery. The crucial advantage of the service however, is that collection does not need to be anchored to brick-and-mortar outlets. We are now beginning to witness the rise of retail within spaces such as train stations, the London Underground, petrol stations and schools. The introduction of collection points that integrate into the everyday lives of consumers are creating a ‘middle geography’ between customers and retailers. Indeed, this concept has the potential to solve many current issues associated with access, catchment areas and land use policy.
Although some observers have commented on the advantages and disadvantages of traditional the click and collect model inside physical stores, studies regarding the potential of this middle geography are sorely absent. This analysis aims to rectify this, deploying a quantitative based study revolving around a hypothetical partnership between a major UK grocery retailer and petrol station operator. The study aims to prove the fantastic contribution this ‘middle geography’ can add to convenience retailing.

Brief synopsis: The aim of the project is to capture the spatial distribution of students in higher educational institutes across the UK and NI for the use by field based analysts in the assessment of potential Co-Operative Food sites. The data will aim to enrich current data surrounding the location of Universities in an attempt to gain the best local knowledge about an areas student population. With the launch of the Co-Operative NUS student 10% discount, it seems apt to understand where these customers are and in what volumes.

This data differs from current datasets as it includes numbers of students at various locations as opposed to a student number geolocated to one singular location. University campus data captures populations by mode (part time/full time), Level (Undergraduate/Postgraduate) and staff by full/part time. Rationale surrounding including this detail surrounds understanding that different cohorts shop Co-Operative differently in terms of basket spend, time of day and basket contents.

Accommodation data includes data including what company/institute manages it, whether it is self-catered, catered, mixed or part catered and the maximum capacity of the accommodation. This data was included upon the basis that spend will be different dependant on these factors ie. Students in catered accommodation will have different basket content and spend.

All data includes a ‘notes’ section which is a freetype column included to add any details deemed relevant ie ‘Accommodation opened recently’, ‘postgraduates only’ or ’52 week contract’. This is to enrich the local knowledge further in order to aid assessment by analysts.

Brief synopsis: The South-Western Ambulance Service Trust (SWAST) was consistently failing to reach the national Category A response targets, of attending to 75% of incidents within 8 minutes and 95% within 19 minutes, following its adoption of a neighbouring trust. The rurality of its catchment ensures that the provision of an efficient ambulance response remains difficult. This research aimed to analyse ambulance access, using a multidimensional approach, to investigate the urban-rural differences between Dartmoor and Exeter, south-west England.

Within ArcGIS 10.2.2, the first dimension, accessibility, was analysed by calculating ambulance response times to each Population-Weighted Centroid (PWC) and road traffic collision using the ‘Closest Facility’ tool. This revealed that response times were greater in Dartmoor and that 75% of Category A incidents were not responded to within 8 minutes, thus failing to achieve the national target. Using the ‘Location-Allocation’ tool, standby ambulances were placed at strategic locations to reduce response times in Dartmoor by 3.8 minutes and allowing the national target to be achieved.

The second dimension, availability, was analysed using the Enhanced Two-Step Floating Catchment Area (E2SFCA) and the Two-Step Floating Catchment Area (2SFCA) methods: a concept not previously applied to ambulances. A value was derived for each PWC, which is a function of the number of ambulances which can access each PWC, and the number of people these ambulances can reach, within 19 minutes. These methods successfully identified areas which appeared to have either an insufficient or abundant number of available ambulances.

Combined, analysing the two dimensions of access is integral for ambulance services struggling to achieve the national targets. Abundant ambulances in one area, highlighted by the availability analysis, can be redistributed to the standby locations, depicted during the accessibility analysis, to improve ambulance response times.

Sadly Taylor wasn’t able to attend so we don’t have a photograph of him but you can still read his application here: Bronze winner – Taylor Day – Southampton

Well done to all our winners and those who entered and didn’t get placed. We really enjoyed reading all your entries and we were delighted with the number of applications and diversity and quality of dissertations submitted.

We will be running the competition again next year so please help us to spread awareness and encourage innovation in site location analysis.